The Co-op recently ran a naming competition for the 10 turbines on the Ben Aketil site. Over 50 people entered providing the Co-op board of directors with 150 names from which to select a winner. After much deliberation, Donald Lockhart from Struan Primary School was chosen as the outright winner after giving names to all 10 of the wind turbines. The names Donald suggested related to the old Norse names for the various farms in the area. Although each turbine is yet to be christened with its name, which hopefully will be put on a plaque at the windfarm, the 10 winning names are:

As the winner, Donald was chosen to officially open the wind farm with Falck Renewables Chief Executive, Willie Heller, on Friday the 6th June 2008. 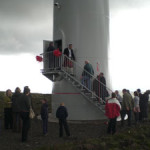 (Guests at the Open Day)

The Co-op board and the wind farms developers, Falck Renewables, were so impressed with the entries that they have decided to give a joint prize to each school that entered. Donalds school will receive £400, to be spent on environmental and energy related material, and each of the other 6 schools that entered will receive £100.

The two runners up in the competition were:

The ISRC board thanks everyone who entered the competition. It was a difficult task to select an overall winner!